An afternoon at the Marciano Art Foundation

As anyone who wanted to discover the Marciano Foundation in La, we decided to get our tickets online! Surprise! There was not any available spot before 2 months, so here we are getting the tickets and waiting for this day to come!

After driving all the way from Santa Monica, we arrived at the door of the Foundation, excited to discover this well-known exhibition.

When we got in there, a woman checked our bags and gave us a map so we could get oriented in the different rooms and floors.

First, what stroke us the most was the huge painting, with a lot of colors, standing in the entrance. Mixing yellow, red, blue, black, orange and red, this artwork was the one who spoke the most to us. We could have sat there and watched it all afternoon, but as the staff told us, we only had three hours before the foundation closed and we wanted to see everything!

On this floor, you can discover some artworks realized with iron and bamboo, consisting of huge sculptures still on the 1st floor, by Chinese artist Ai Weiwei.

Then we continued the visit on the first floor. Wow! When you get out of the elevator, you arrive directly face to face with the famous “AMERICA” lights that you can see all over Instagram. These golden and dark lights, playing with shadows introduces the “America” part of the exhibition, which will consist of American artists and a depiction of the new continent history, as well as a part focusing on black history. 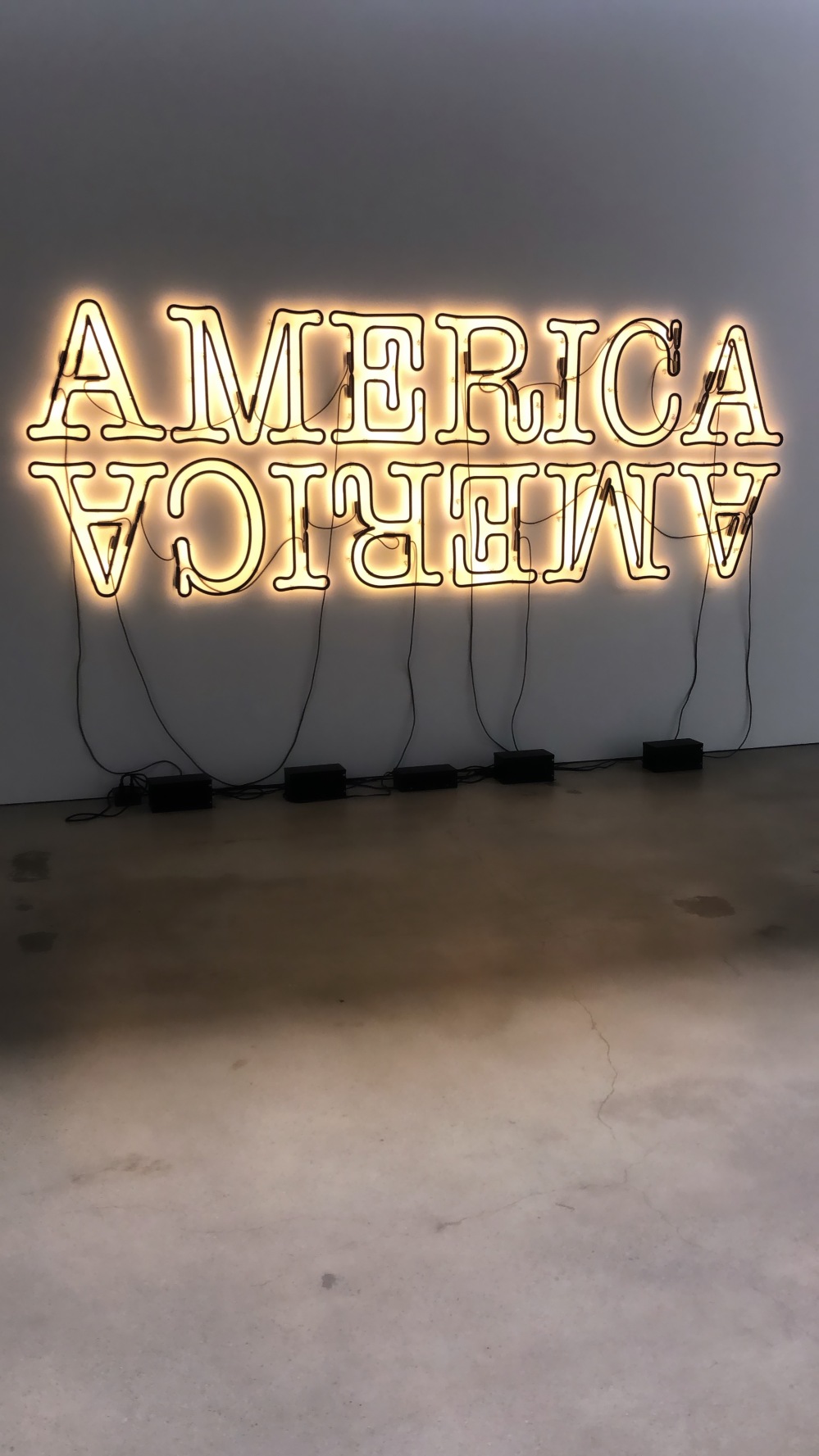 My favorite artwork for all exhibition was on this floor. Huge printed novel pages, covered with ink, realized by Glenn Ligon.

“American artist Glenn Ligon (b.1960) is best known for his landmark text-based paintings, made since the late 1980s, which draw on the influential writings and speech of 20th-century cultural figures including Jean Genet, Zora Neale Hurston, Jesse Jackson, and Richard Pryor. Throughout his career, Ligon has pursued an incisive exploration of American history, literature, and society across bodies of work that build critically on the legacies of modern painting and conceptual art. His subject matter ranges widely, from the Million Man March and the aftermath of slavery to 1970s coloring books and the photography of Robert Mapplethorpe, within artworks that are both politically and formally rigorous.

Ligon’s most iconic works are large-scale, text-based paintings featuring appropriated sentences that are stenciled and repeated to cover the length of the canvas. In these works, the stencil gathers material from the medium—most often oil stick or oil stick and coal dust—as it moves along the surface. The build-up of material obscures the legibility of the text.

Since 1996, Ligon has used James Baldwin’s seminal 1953 essay “Stranger in the Village” as the basis for his Stranger series, which comprises nearly 200 works including prints, drawings, and paintings. Written during a stay in a remote Swiss mountain village, Baldwin’s “Stranger in the Village” examines the complex and urgent questions about blackness, white supremacy, and colonialism. Ligon excerpts and transforms this text in this stenciled series, making it abstract, difficult to read, and layered in meaning, much like the subject matter Baldwin addresses.”

On the last floor, we encountered very different artworks, from Californian artists to the Instagram famous tulips created by Yayoi Kusama.

The first striking artwork consists of the multicolor windows’ exhibition by Ugo Rondinone. Staying in this room you feel like observe by yourself. All the windows are in fact mirrors, where you see yourself instead of actually seeing outside, which is normally the goal of a window… 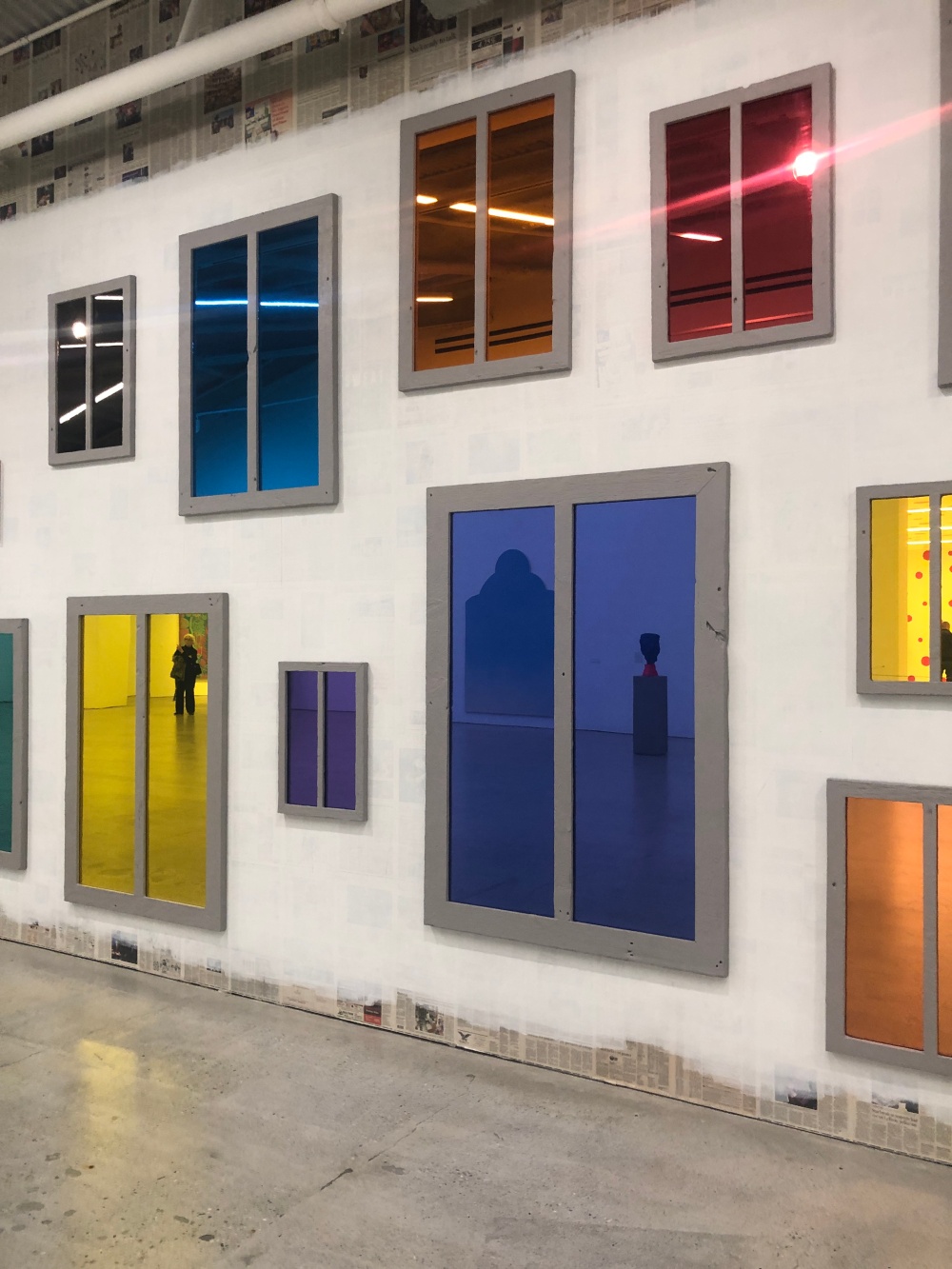 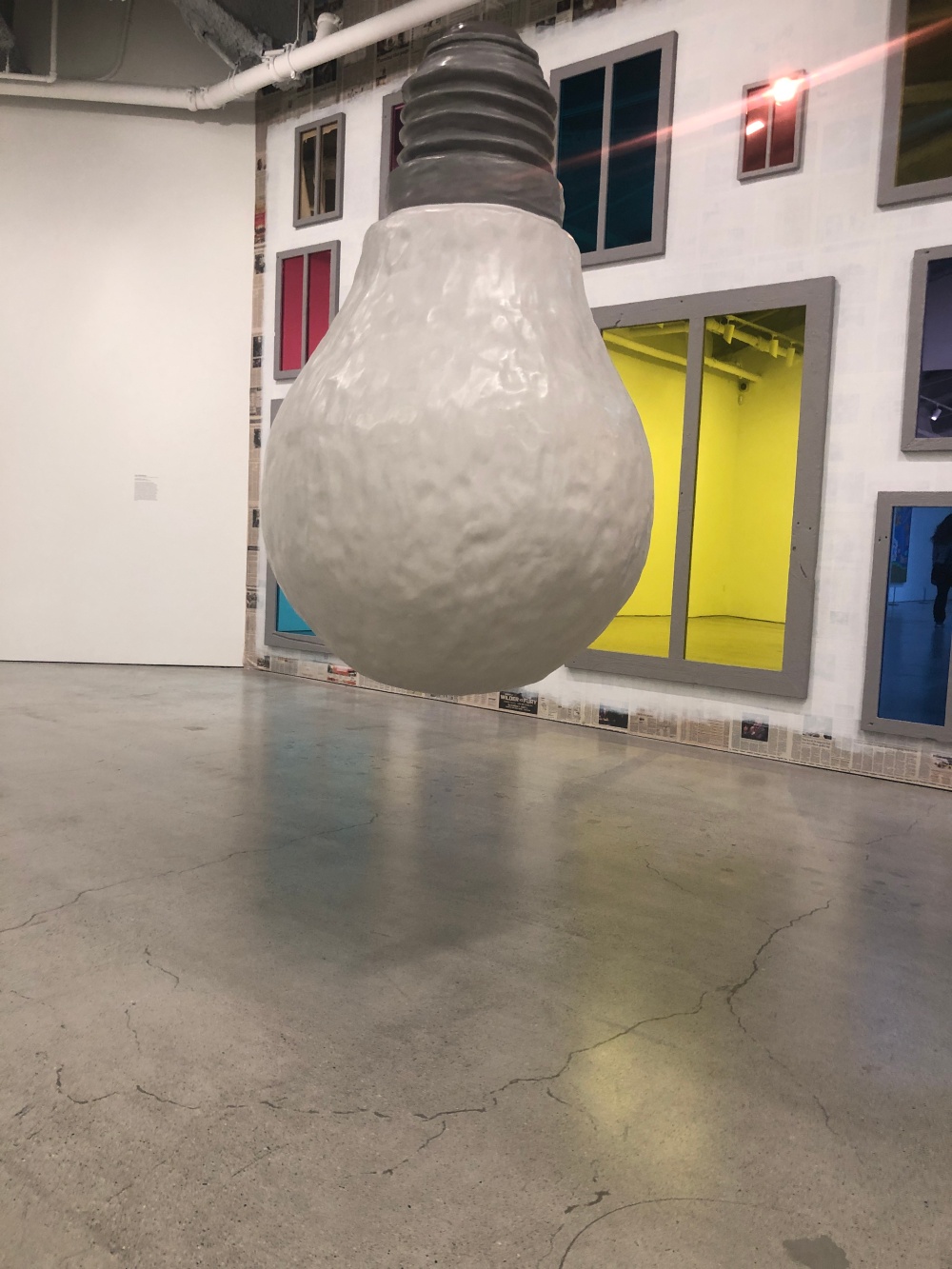 “In his work, Swiss artist Ugo Rondinone (b. 1964) addresses the human condition and the natural world. The selection of artworks curated by the artist includes materially diverse sculptures, installations, and paintings that seduce viewers into his fold and provoke them to reflect on mortality and the inevitable passage of time. The artist’s works are at once deeply optimistic and idealistic, romantically wistful and mournful, exuberant and morose. He achieves this range of tones by utilizing bright colors and familiar objects to mask an underlying thread of melancholy. Rondinone often transforms the color and scale of familiar natural elements, such as mountains, waterfalls, clouds, and the sun to create intimate settings for contemplation and meditation.”

Another part of the exhibition is dedicated to Californian artists, from very modern and contemporary artworks to classic paintings, United States Of America is still in the center of the picture, as well as history, and a criticism of consumerism.

“A selection of over 40 works by 30 artists, the latest presentation of the Marciano Collection in the Ballroom Gallery will showcase artists who live and work in California.”

YAYOI KUSAMA, WITH ALL MY LOVE FOR THE TULIPS, I PRAY FOREVER, 2011

We finally arrived at the part of the exhibition that we had been waiting from the moment we entered the foundation, Yayoi Kusama’s tulips room.

As we were walking to get into the room, the staff asked us to put on some protections on our shoes and that we could not touch anything in this area of the foundation. Our question was then “Where to walk?”, we were so scared to touch something and ending up getting expelled of the room.

The white and red color is so peaceful together that you feel like not being in the same world for a minute and traveling in another universe. 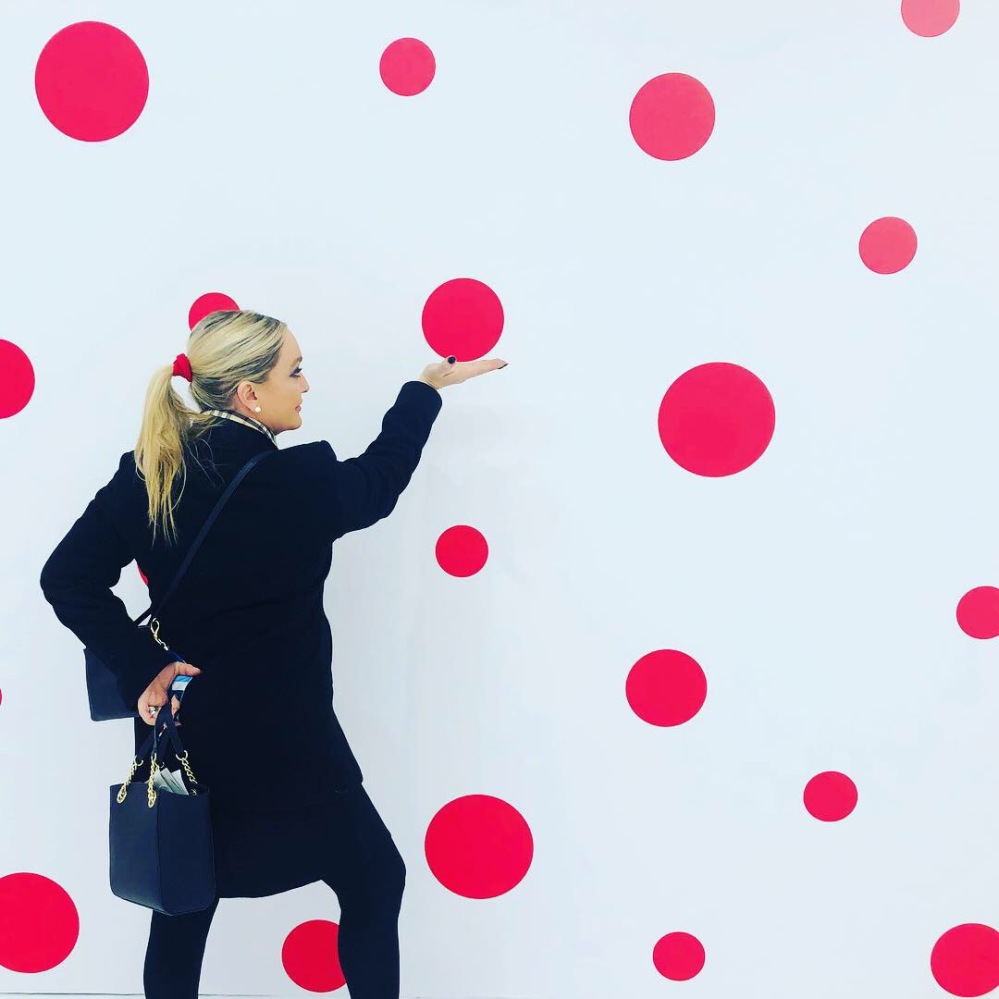 “Kusama’s exuberant sculptural installation With All My Love For The Tulips, I Pray Forever (2011) exemplifies the dualism found throughout her work between the organic and the artificial. Shown here for the first time in Los Angeles, the oversized flower-potted tulips made from fiberglass-reinforced plastic are painted with the same red polka dots as the floor, ceiling, and walls, creating an immersive viewing experience while at the same time diminishing the appearance of depth. This work exemplifies Kusama’s singular vision and her distinctive gift for drawing viewers into the work on a deeply visceral level.

And this is how our day at the Marciano Art Foundation ended.

Don’t wait to visit, we are waiting for your impressions!