Laurel Holloman debuts a series of new work in “Memory and Movement” taking place on American Independence Day in the heart of Paris.

What: Memory and Movement present stunning new works from Laurel Holloman as well as several paintings from her series Color Forest, which premiered during the 2018 Milan Design Week.

For this exhibition, the theme of movement is beautifully expressed with swirling shapes flowing across each canvas and energetic brushstrokes whipping across rich shades of color.

Certain images are deliberately blurred so the viewer must sit with each piece a little longer to perceive its meaning. Many of the larger pieces are paintings within paintings where Holloman has left the first layer peeking through the next by either blurring the final layer or scraping back to the first layer underneath it all. Holloman purposely juxtaposes the technical memory of the paint with her own conscious and unconscious memory.

“I believe the task of preserving memory is difficult because the unconscious mind is constantly changing it. This is why it is so complicated, but yet so interesting to explore in paint. Memory is never finite. Never a complete truth. It can stay close, but is never a twin,” the artist muses.

“Memory is attached to an emotion, so I used a select life event when painting each work and I also wanted to technically see what the paint reveals in memory when it is layered a certain way.”

Co-produced by Little Monkey Productions (USA) and Claudine Gil Galerie (France), Memory and Movement is Holloman’s second solo exhibition at Galerie Joseph. Her first show at the gallery was in 2014 with The Fifth Element, a series that explored the elements of earth, air, fire, and water.

These forces still unite her recent works, which burst in hues ranging from fiery red and deep watery turquoise to lush greens and earthy tones. Whether blurred or sharp in focus, there is a constant theme of nature in Holloman’s palette. Her paintings take the viewer elsewhere to another world of extreme color, spirituality, and meditation.

About the artist, Laurel Holloman: Based in Los Angeles, Laurel Holloman is known for her vibrant use of color and larger-than-life paintings capable of capturing tumultuous emotions with a vivid movement that create a three-dimensional illusion.

“I feel my paintings have a secret language born out of science and my obsessiveness with why and how we are here. I paint through abstraction with subtle hints of elemental imagery; the sky, water, fire, earth, a bird flying, cells reproducing, or a celestial bed of stars. I am obsessed with metallics and textures and use playful brushstrokes that give the paintings a third dimension and explore emotion,” she reveals.

Ever since her acclaimed debut in 2010 with her New York studio collection, TriBeCa, Holloman has firmly established her artistic presence both domestically and abroad.

In April 2012, Coeur Libre exhibited at the Pantheon Town Hall in Paris by invitation of the mayor. In this show, some 15 of Holloman’s works were on view. Juxtaposing the sensation of freedom with the weight of repression, Holloman was able to capture the dichotomy of opposing forces—a recurring through line in the artist’s oeuvre—by skillfully playing with multiple layers of color, texture, and movement.

This show was followed by Free Falling at The Ateneo Veneto and ran during the 2012 Venice Architecture Biennale and was the first exhibition to contain large luminous murals. This exhibition was also the first collaboration between Holloman and Lea Mattarella, art history professor and art critic for La Repubblica, who curated the installation.

In spring 2013, All The World Inside featured 17 large-scale murals in three rooms at the Grand Palazzo Italia (Berlin). Also curated by Mattarella, this impressive collection furthered the artist’s visual and visceral discourse on universal elements and existentialism.

Holloman’s interest in “the how of life” is demonstrated in pieces such as Inevitable Fault Line and The Necessity of Affection, which ask how are we connected together—and can we thrive without connection?

In summer 2013, Holloman’s painting Swell was picked for the group show, Nell’Acqua Capisco, at the Venice Art Biennale where it was chosen for the official catalog.

In July 2014, The Fifth Element was held in Paris at Galerie Joseph where it was met with a public increasingly drawn to the poetic emotion of Holloman’s work. The 28 pieces visually reflect the four major tangible elements—Earth, Air, Water, Fire—while the mysterious “fifth element” is represented in the emotion of each painting.

This show was followed in October 2014 by an invitation to the International Contemporary Art Biennale in Buenos Aires. Holloman’s work entitled The Reach was awarded First Prize of the Biennale in the paintings category and won the Banco Ciudad Award for the Best Work in all categories.

In November 2015 in London, the artist presented The Innocents, a stunningly intimate series featuring portraits of women and children. Showcasing the range of Holloman’s vision and talent, these works veer from the abstract and focus on the figurative immediacy of each subject to offer an emotional exploration of how life changes us as we age.

In summer 2016, the Jan van der Togt Museum in Amsterdam (Netherlands) invited the artist for a solo exhibition. In this show dealing with environmental issues, Holloman captures actual images of woods, plants, and animals in their damaged natural spaces.

Reminiscent of stained glass, Everglow is an installation of 12 back-panel LEDs that serve as a commentary on our current global warming crisis. Each piece is a combination of fire and ice, representing the inevitable melting we have witnessed in our farthest-reaching climates. As the artist declares, “We cannot deny at this moment we are dependent on nature for our survival. Put simply, science doesn’t lie.”

Also in this show, Painting in Reverse is an exploration in recycling and reusing materials. Originally created in 2014, the painting was never used and left unfinished in the studio. Instead of repainting the piece or throwing it away, it was de-framed and sanded over a four-month period to remove all the paint down to the primer. Each sanding session was photographed and certain sections were chosen to leave the remaining paint intact. The process was aimed at creating the look of old blue jeans. A pair you could never throw out.

In Fertile Ground, Holloman’s second London exhibition (Bankside Gallery, July 2017), the artist continued to explore her favorite themes of nature, including the world of flora—from the tight abstracted micro images of flowers to posed portraits of the different stages of blooming.

In Holloman’s words, “I have always been fascinated with flowers and the evolution that nature creates as they start to bloom, then open, and eventually deteriorate. The shapes, the turns, and the elegance of the petals, all interest me. Flowers have valleys and crevices close up, just like a landscape.”

In April 2018, Color Forest at the Luciana Matalon Foundation in Milan revealed several works referencing the style of large murals Holloman created for her solo shows All The World Inside and The Fifth Element, but with dimensions more suited to the spaces of the foundation.

The link between these works is not only the stylistic choice but also the theme: the “liminal space or threshold” that is the border between life and death. From this sentiment also comes a section entitled Memory Paintings, in which layers of paint are superimposed with patinas of gold and silver diluted in linseed oil, to which tiny amounts of pearlescent pigments and color are added. The result is iridescent works that—depending on the viewer’s point of view—represent “a sort of search of the imaginary that nevertheless fades too quickly.”

Returning to technical experimentation, Holloman created a series of paintings in which the color is mixed with a light resin, “a perfect combination of landscapes and to create light” as well as to create organic impressions, which reflect the artist’s curiosity for science. 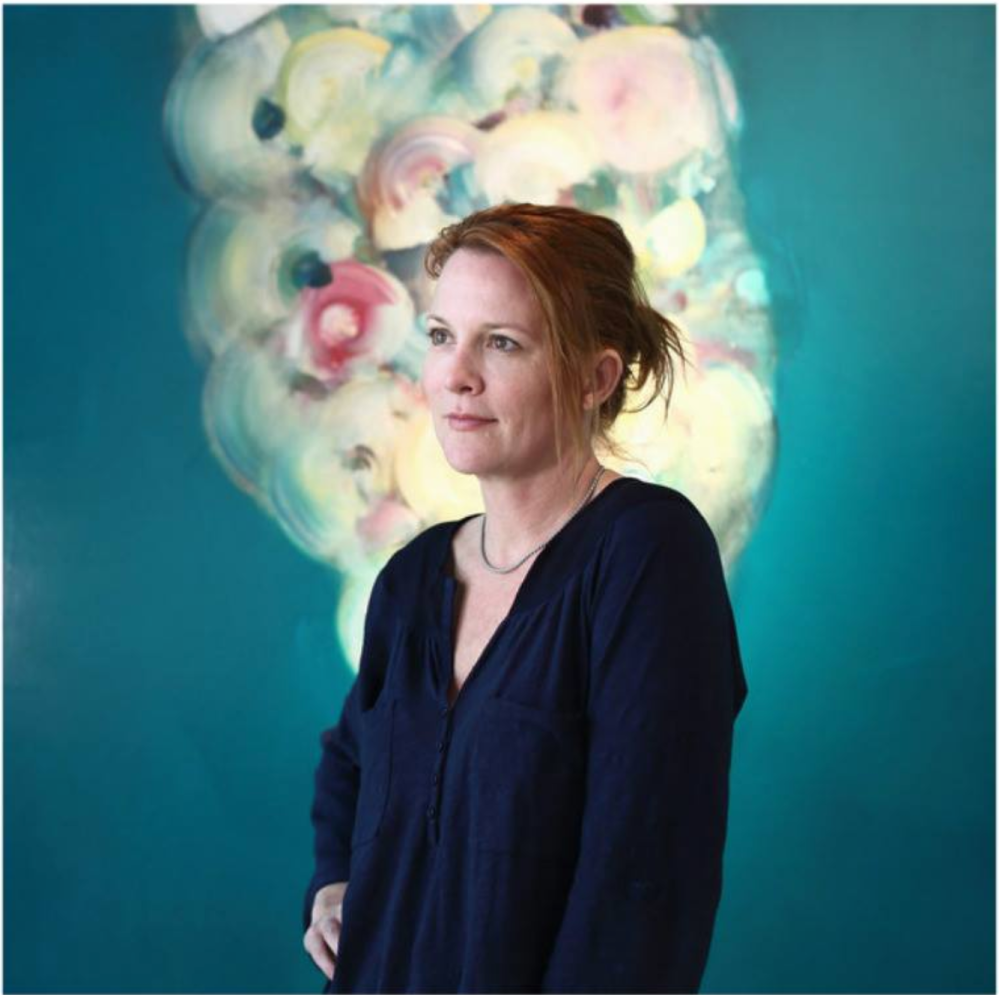 Laurel Holloman earned her Bachelor of Arts at the University of North Carolina at Chapel Hill, majoring in performance art and visual art. She continued her studies at UCLA and the British American Drama Academy in London alternating between theatre and visual art.

Before she decided in 2010 to become a full-time painter and make a mark in the art world, Holloman had a successful 20-year acting career.

Her performances include the acclaimed 15-year-old Mick Kelly in the off-Broadway play The Heart is a Lonely Hunter, a breakthrough role as a gay teen in Two Girls in Love, which played at the Sundance Film Festival, followed by several characters in independent films directed by Paul Thomas Anderson and Jean-Marc Vallée.

Holloman then turned to television with a recurring role in Angel and the lead in The L Word for which she won The Golden Satellite for the Best Actress in a Drama Series.

2013: All the World Inside, Palazzo Italia, Berlin, Germany

“Coloring the world, one story at a time”